Unsightly, disfiguring scars, or defects can be disconcerting and often devastating to one’s self-image.  Dr. Velargo is sensitive to this and is highly skilled in scar revision surgery of the face and neck.

“Surgical treatment” for deep scars and skin defects implies that incisions may be made to remove the existing scar or blemish.  Each incision made into the skin, regardless of where it is placed, who makes it, for what purpose it is made, or whether it is deliberate or accidental, heals in the same manner as any other cut; that is, it produces scar tissue—nature’s method of healing. This simple fact is frequently forgotten or ignored by individuals who think that a plastic surgeon can make an incision and leave no visible scar and that he can, in fact, eliminate existing scars.  In reality, Dr. Velargo’s goal is to replace an unsightly or disfiguring scar with a better scar, one which is more narrow, more level, blends with the surrounding skin surface, and which causes no contracture or pull on the surrounding structures; in short, one which is as inconspicuous as possible. The final appearance however is dependent on many factors, one of which is the patient’s own healing capability.

The passage of time is the best, the kindest, and, in the long run, the simplest treatment to give to any scar of recent origin since most will undergo spontaneous improvement if given enough time to do so, often 6 to 18 months.  A decision regarding scar revision may be delayed until this time has elapsed. However, scars which cause distortion of normal structures (eyebrows, lips, eyelids, nostrils, etc.) those which spread widely or produce deformity by contraction, and “U” or “J” shaped scars may be repaired earlier because little or no improvement in the basic problem can be anticipated with the passage of time.

WHAT CAN A SCAR REVISION ACCOMPLISH?

A scar revision can correct scars that are:

If any or all of these characteristics are present, improvement in any one of them should make the scar(s) less conspicuous. Correction of two or three of these factors can often result in dramatic improvement of the appearance (and sometimes function) of the scar(s). 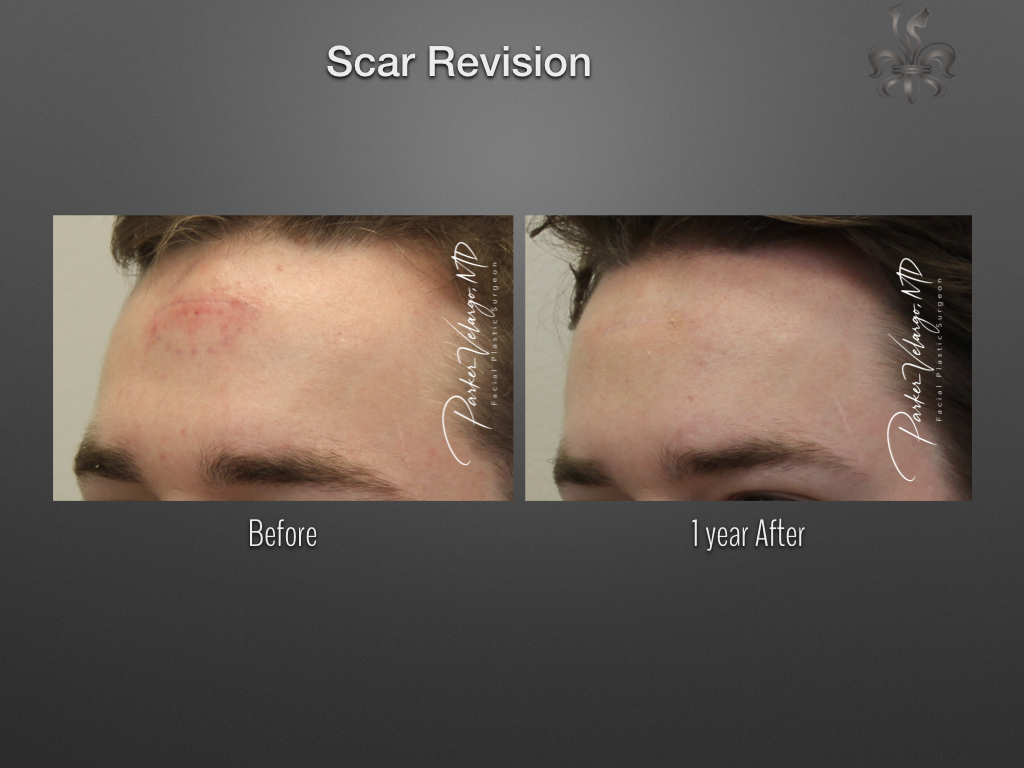 WHAT HAPPENS DURING A SCAR REVISION?

Dr. Velargo will spend time with you in consultation to ensure that every effort is made to reach your goals in a realistic manner.  Dr. Velargo will analyze your scar and develop a unique plan for improvement.

When removing an existing scar or blemish by simple excision, Dr. Velargo makes every effort to place the line of incision as nearly as possible in or parallel to one of the normal crease lines of the face.  Simple excision of the old scar with meticulous closure may be all that is required.

Sometimes it may be necessary to change the direction of a scar so that it will follow these lines – a technique known as a Z-plasty.

Changing the direction of some scars is impossible and may require an additional technique of camouflage such as W-plasty or geometric broken line closure.

Lastly, skin resurfacing procedures such as dermabrasion or laser therapy may be indicated to smooth out scars.

What Can I Expect During Recovery From A Scar Revision?​

Removal will result in another though, hopefully, improved scar

More than one procedure may be required.

Scar revision often requires at least two and frequently three surgical procedures to obtain the best achievable result. Usually 6-12 months separate each stage. Some scars “mature” more quickly therefore, subsequent stages may be performed sooner. Later stages of scar revision are typically reserved for resurfacing procedures such as dermabrasion or laser therapy in an effort to smooth out and blend the scar.

Possibly conditioned by what they see on television and in the movies, many people expect the final result immediately and become disappointed and troubled because they have to wait for “maturation” of their scars. Maturation is the continuing change in appearance all scars go through until they reach a state where no further change will occur.

Maturation of scars may take from 6 to 18 months; sometimes longer, especially in young children. Initially, a freshly repaired incision of scar usually looks pretty good. Then it becomes reddened, possibly somewhat raised above the surrounding skin and frequently is hard or lumpy. Gradually, (unless the scar is frequently stressed by stretching the surrounding skin) the firmness and red color lessen and should disappear, leaving a softer scar which is usually more level with and somewhat lighter in color than the adjacent skin.

One of the paradoxes of healing is that scars on younger children may take 18-24 months, sometimes longer, to mature, while the same scar on a patient in their 60’s may be flat, thin and soft within 3 months. This is one of the unpredictable factors that accounts for the variability in the final result that occurs with scar revision and wound healing.

Some swelling and discoloration can be expected with any surgical procedure. It can be minimized by applying ice over the operated area during the first 48 hours.

How can we help you have an easy recovery?

In most situations, Dr. Velargo places a tape dressing over the suture line to help protect it. Do not disturb the tapes. They will be removed during your “one week” post-operative visit.  If they start to peel, you may cut the edges, but do not pull them off.  Often Dr. Velargo will re-tape the incision sites for an additional week after he removes your sutures to further support the new healing scar.

When no tape has been placed over the suture line, you should clean the incision line of any crusting with hydrogen peroxide and apply Bacitracin ointment 3-4 times per day.

Dr. Velargo feels it is beneficial for you to tape the incision site at night or whenever you can for at least six months.  He will provide you with a roll of brown paper tape.  Pulling or exerting any tension on any scar seems to promote the formation of new unwanted scar tissue.  Properly applied cross-taping will relieve some of the tendency for additional scar formation, so he recommends you do it as much as possible.

Contact the New Orleans Center for Aesthetics and Plastic Surgery today to find out more about expert scar revision surgery.